The financial market impacts of the COVID19 Crisis

In 2019 and even 2018, economic experts were expecting a global recession for 2020 and the years to come. Some said that it will last for the whole decade.

A global recession comes when there is a “collective loss of faith in the economy.”, said chief economist of Moody’s Analytics Mark Zandi for CNN Business and added, “investors, businesses, and consumers decide en masse to head for the bunker, selling stocks and real estate, cutting investments and jobs, and pulling back on spending.”

What could drive to a great recession?

A professor at NYU’s Stern School of Business Nouriel Roubini wrote for Project Syndicate that the trade war between China and the USA and other trade disputes create a drag on economies, the global stimulus packages were coming to an end already in 2018, that inflation is coming, and that interest rates are now on an upward trajectory.

After a crash in 2008, the U.S. economy is still growing quite slowly, barely making enough jobs needed to keep the unemployment low, pointed Zandi.

“If the economy were to slow any further, for whatever reason, then unemployment would begin to rise. Once unemployment increases, even from low levels, recession becomes more likely than not.”

People lose their jobs and don’t have money to buy products and pay their debts. Profit of other companies lowers too, so they don’t want to hire new people, don’t increase the pays, and fire even more employees. So, unemployment rises even more.

A survey published in mid-August 2019, made by the National Association for Business Economics, showed that 72% of economists predicted that a recession would occur by the end of 2021. Some of those economists (38%) expect a recession to strike in 2020 and the rest (34%) in 2021.

And then came the Black Swan, the Coronavirus

When the coronavirus took over the world in March, the Financial Times Stock Exchange Group (FTSE), Dow Jones Industrial Average and the Nikkei saw a huge downfall in the stock markets, as the Covid-19 cases grew. That kind of fall hasn’t been seen since 1987.

Even though, executives from all around the world are still optimistic about economic conditions in their countries. At least some of them were until June – North America and developing markets (the Middle East and North Africa) respondents’ outlooks about their countries’ economies have taken a negative turn in June, as it is pointed out in a recurring survey made by McKinsey.

In the same survey, respondents were given a few scenarios of how the virus will affect the economies in their countries. In the survey made in June, the executives were more likely to choose the optimistic scenarios, in which the virus is contained and growth returns slowly to pre-crisis levels (A3 scenario) and in which public-health and economic-policy interventions are partially effective, and the return to pre-crisis levels of GDP, income, and corporate earnings will take time (A1 scenario).

Still, the A1 scenario is chosen by the largest share of respondents as the likeliest outcome for their own countries in the next year. The second most common answer was the B2 scenario, in which public-health interventions are effective but do not prevent virus reoccurrences, and economic-policy interventions are insufficient to deliver a full recovery to pre-crisis levels.

COVID10: The worst and the best performing countries

Unemployment in the USA is now 7.9%, according to the the U.S. Bureau of Labor Statistics.

CHART: Quarterly growth of the real GDP in the United States from 2011 to 2020 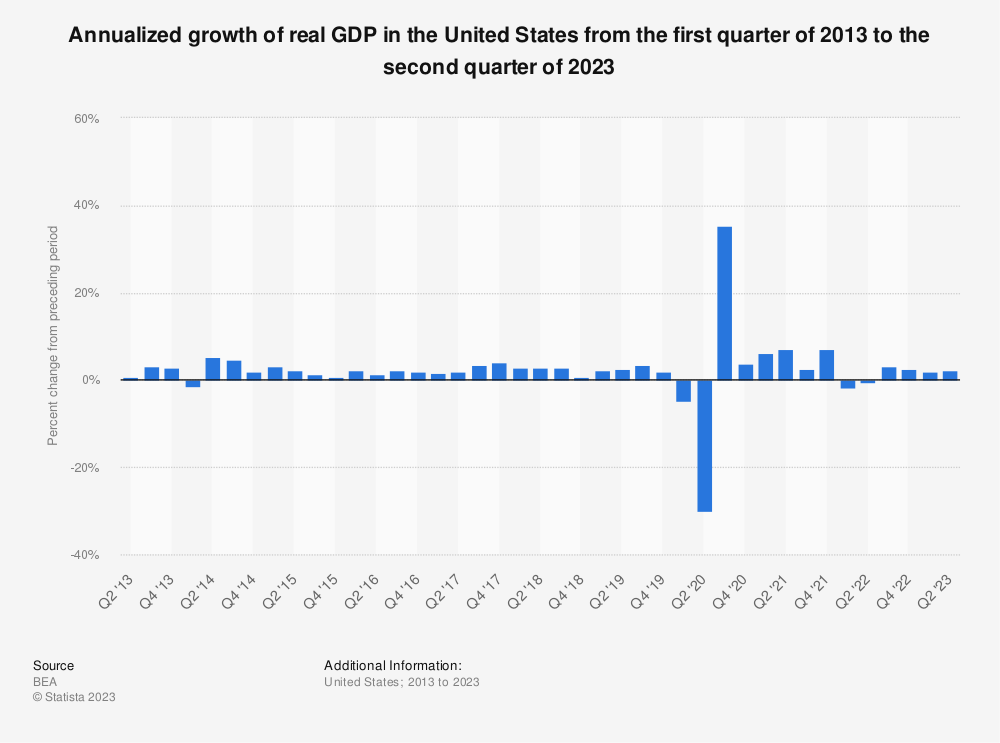 The International Monetary Fund projects global growth in 2020 to fall to -3 percent. Compared to the Global Financial Crisis in 2009, when the global growth fell -0.1 percent, the Great Lockdown is the worst recession since the Great Depression.

In their report, projections of growth across regions are somewhere quite bad, but there are economies that will withstand the crisis. Projections for China and India suggest that they will have positive growth, by 1.2 and 1.9 percent respectively.

“The large, timely, and targeted, fiscal, monetary, and financial policies already taken by many policymakers – including credit guarantees, liquidity facilities, loan forbearance, expanded unemployment insurance, enhanced benefits, and tax relief – have been lifelines to households and businesses”, says the report.

The biggest economic bailout plans for financing the debts

“For the first time, the EU’s 27 leaders have agreed, in effect, to establish a federal deficit as an instrument of macroeconomic crisis management”, points out a report on the Financial Times.

The help will work like this – Brussels will borrow money on the debt markets and then distribute it as grants to hard-hit countries to help finance their reconstruction efforts. A link between aid payments and respect for the rule of law is still to be defined.

“Municipalities will have money to deal with what they’ve had to do during the pandemic to keep their citizens safe,” MPP Jeff Yurek (Elgin—Middlesex—London) said of Wednesday’s announcement. “This money will really help the bottom line as municipalities can not carry a deficit.”

By summer’s end, London’s deficit was projected to be between $22 million and $33 million. That’s why the council made cuts to programs and services, so they trimmed the shortfall to about $13.5 million.

At the end of March, Trump signed the largest-ever US financial stimulus package, worth almost $3 trillions. More than 60% of that is in the form of grants or funds that will not be recovered by taxpayers.

Most of the money is for individual Americans in the form of additional unemployment insurance or the so-called economic impact checks. The rest represent bailouts for American companies, large and small.

What happens after the support money is spent?

There are already companies that filed for bankruptcies because of the coronavirus pandemic, and experts expect a new wave of bankruptcies in the fall. In the US, a total of 3,427 companies have filed for Chapter 11 bankruptcy this year (until 24th June), according to a report on the Financial Times.

“Bankruptcy filings in the US are running at the fastest pace since 2013 as companies buckle under strain unleashed by the coronavirus pandemic.” says the report. The situation is similar to the one happening in 2008 when the last economical crisis occurred.

Even with the help of the governments, some companies can’t get out of their debts. The coronavirus crisis exposed deeper problems of those companies, “whose business models were already struggling to deal with changes in consumer behavior.”, according to a report by The New York Times.

At the end of the first quarter in 2020, the US companies made almost $10.5 trillion in debt. That sum is the biggest since the figure started being tracked, after World War II. That’s why the new wave of bankruptcies is expected soon.

Some industry sectors are doing even better than before the pandemic

The first industry that is going to thrive is pharmaceuticals and healthcare, especially the companies developing the coronavirus vaccine. Some companies responded to increased customer demand for face masks by increasing production, according to an article published at The Lawyer Portal.

The consumer goods industry is on the roll, too. People started stocking food and supplies that can last longer, such as frozen and canned goods, toilet rolls, hand sanitizer, and pasta.

With the fear of going out, there has been a shift in the virtual space, so e-commerce, home entertainment, social media, virtual meetings, e-learning, online groceries, and “dark” kitchen (virtual restaurants) have all thrived during the Covid-19 pandemic.

Covid and Bitcoin: How are cryptocurrencies doing?

Trading in Bitcoin and other cryptocurrencies increased during the pandemic, especially from February until May, according to the Forbes report. A study from Cornerstone Advisors showed that 15% of Americans own cryptocurrencies and half of them invested in cryptocurrencies for the first time this year.

As there is a finite number of Bitcoins, 21 million, it is no surprise that the value of a bitcoin grew. “During times of economic uncertainty, investors tend to turn to assets with a fixed supply, such as gold, as they are not subject to inflationary measures like quantitative easing.”, says the Independent report.

There are events that could affect the stock market in the second half of 2020. The U.S. November elections are quite close and presidential election years “typically are good for the stock market”, according to an article published on Azcentral. But, there have been exceptions, just like during the last recession in 2008.
The trade war between China and the USA is already affecting the stock market because all eyes are on what is going to happen next. On Monday, Trump’s administration made even bigger restrictions on Huawei by cutting the company off from chips made by foreign firms that have been produced with U.S. software or technology.

The Great Reset, a radical plan to transform the World?

The financial market impacts of the COVID19 Crisis